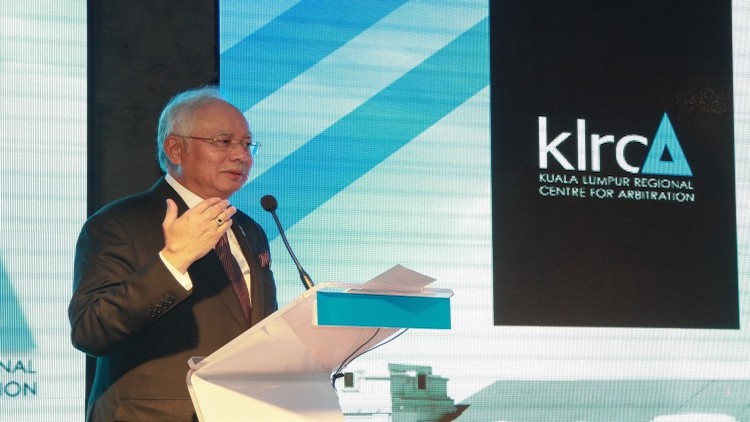 4 November 2014 – The grandeur of the past met Malaysia’s sparkling modernity, as the eighty four year old Bangunan Sulaiman – recently refurbished into one of the world’s largest arbitration centres; was spruced up with beaming lights, freshly minted banners, delicately sculpted landscape, and symmetrically pressed flags straight from the printers – all of which accompanied the air of buzzing anticipation as the Kuala Lumpur Regional Centre for Arbitration (KLRCA)’s new premises was officially unveiled to the world. Lucent giant air balloons carrying KLRCA’s logo and the Malaysian flag hovered elegantly above the art deco heritage building, signalling to the country’s capital that something special and momentous was taking place.

It was only befitting that the Centre had the privilege of having the Prime Minister of Malaysia, The Most Honourable Dato’ Sri Mohd. Najib Tun Razak to officiate the landmark event. It was quarter to four in the evening as the business centre of KLRCA began filling up as members of the media, honourable ambassadors, international dignitaries, eminent members of the Malaysian Judiciary and guests completed their registration prior to taking their seats in newly designed state of the art auditorium. Providing the backdrop on stage was a large animated and illuminating LED board that showcased the entire Bangunan Sulaiman with a rotating skyline. As the clock ticked closer towards the five o’clock mark, the auditorium was already recording its highest ever occupancy number; hitting its capacity limit minutes later.

KLRCA’s Director, Professor Datuk Sundra was first to take stage to deliver his opening remarks. He took the audience through a brief history of the centre followed by KLRCA’s achievements and revival path taken since his Directorship tenure began in 2010. Professor Sundra went on to thank all key contributors towards KLRCA’s resurgence before proceeding to share his future plans of making Malaysia a premier hub for all alternative dispute resolution matters in the region. He said, “I intend to continue carrying the Centre in that direction and further hoist the Malaysian flag up high on the international ADR scene.” “Strategic collaborations and partnerships will remain a key component of KLRCA’s growth philosophy, as our hearts are fixed on the betterment of the local, regional, and global ADR landscape – and the only way to widen our reach is through cross border collective affiliations and endeavours,” he added.

Next to take stage, was KLRCA’s Advisory Board Chairman – Tan Sri Gani Patail who congratulated the Centre on successfully putting itself back on the regional and international map. Tan Sri Gani spoke about the advantages and growing importance of arbitral proceedings in the region before continuing to share an example of the recent successful and peaceful resolution of a 24-year old issue arising from differing interpretations of the 1990 “Points of Agreement on Malayan Railway Land in Singapore between the Malaysian and Singaporean governments.

The evening’s guest of honour, Malaysia’s Prime Minister – The Most Honourable Dato’ Sri Mohd Najib Tun Razak was then called by the ceremony’s emcee to grace the podium to present his keynote address. Prime Minister Dato’ Seri Najib Tun Razak said arbitration had today emerged as a strong alternative dispute resolution for commercial and corporate entities in South East Asia, and the government, in recognising its growing importance in this region, was willing to invest in its future.

On KLRCA, The Prime Minister said the centre that was formed in 1978 had now become an integral part of the international arbitration scene and it “must make full use of Malaysia’s competitive advantages to continue to thrive and succeed in the international arena.” “We are convinced that KLRCA, the first institution of its kind to be established in South East Asia, possessed all the right qualities to become the region’s arbitration centre of choice,” he added.

The momentous occasion drew to its pinnacle, as the Prime Minister took his seat on the floor once more before placing his palm on a tablet that triggered a heart drumming and futuristic launch video that projected KLRCA’s previous premises, milestones, arbitration clause and a floor by floor layout of the newly refurbished Bangunan Sulaiman. A rapturous applause by the audience soon followed. To commemorate the official launch of KLRCA’s new home, the Prime Minister was once more invited on stage for the signing of the plaque. Professor Datuk Sundra led the other VIPs on stage to accompany the Prime Minister and bear witness as he signed the plaque.

Proceedings for the evening continued with KLRCA’s Director leading the Prime Minister and the VIPs on a special tour around the building. Amongst the points of interest shown were ‘KLRCA’s Memory Wall’ at the centre’s lobby, the large hearing room equipped with court recording & transcribing services and the arbitrators’ lounge. High tea was held in the arbitrators’ lounge for the Prime Minister and other dignitaries before official matters with regards to the official launch were brought to a close.

A cocktail reception and dinner was then later held in the evening at the pavilion for the invited dignitaries, local and international arbitrators and other associates of KLRCA. It was certainly a significant day to celebrate as a new dawn of arbitration in the region officially commences.