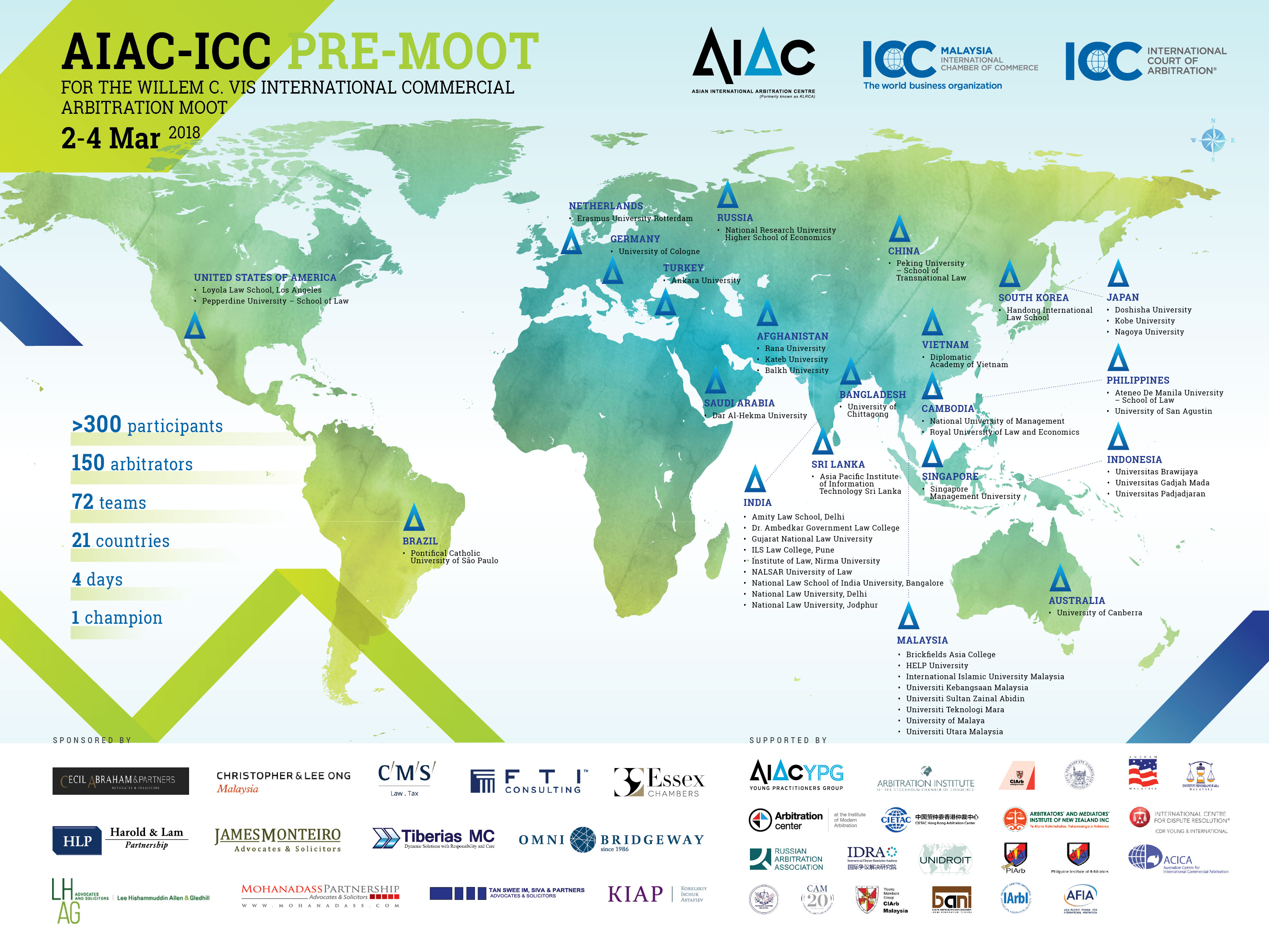 KUALA LUMPUR, 5 MARCH 2018: The Asian International Arbitration Centre (AIAC) proudly announces the successful closing of the 2nd AIAC-ICC Pre-Moot for the Willem C. Vis International Commercial Arbitration Moot. The pre-moot was held on 2-4 March 2018. As a curtain-raiser for the pre-moot, the AIAC Young Practitioners Group also held its first conference from 1-2 March wherein outstanding students and experienced arbitrators shared their practical and academic experience and ideas.

As the venue of the competition and the first conference, the AIAC hosted over 70 teams, close to 300 participants, 177 hearings with 160 arbitrators from 21 countries. This was one of the biggest pre-moots of its kind.

On the first day of the competition, five general hearings were held for the participants. The next day, another general hearing was held before the elimination rounds that eventually determined the best two Malaysian teams, the pairing of the Malaysian final, and the announcement of the Overall Top 4 teams. The final day of the Pre-Moot saw the semi-finals, the Malaysian final, and the Grand Finals just before the Awards and Closing Ceremony.

The AIAC congratulates the following winners of the 2nd AIAC-ICC Pre-Moot:

The AIAC would also like to congratulate and thank all the participants of this year’s competition. The second AIAC-ICC Pre-Moot would not have been successful without their diligence, hard work, and positive attitude throughout the whole process. The Centre wishes all the best to the teams heading off to the Vis Moot (East) and Vienna.

As Datuk Professor Sundra Rajoo emphasized during his remarks before the Awards Ceremony, the Asian International Arbitration Centre believes that “It is important to host the AIAC-ICC Pre-Moot because it brings young practitioners who are going to be the future of arbitration together. This is only the second time that the Centre is hosting this event, and next year it will be even bigger because the AIAC will work even harder, and will continue to spread the message that International Commercial Arbitration is a way of life and doing things right.”

The links to the AIAC website, as well as the Pre-Moot video for more information are: