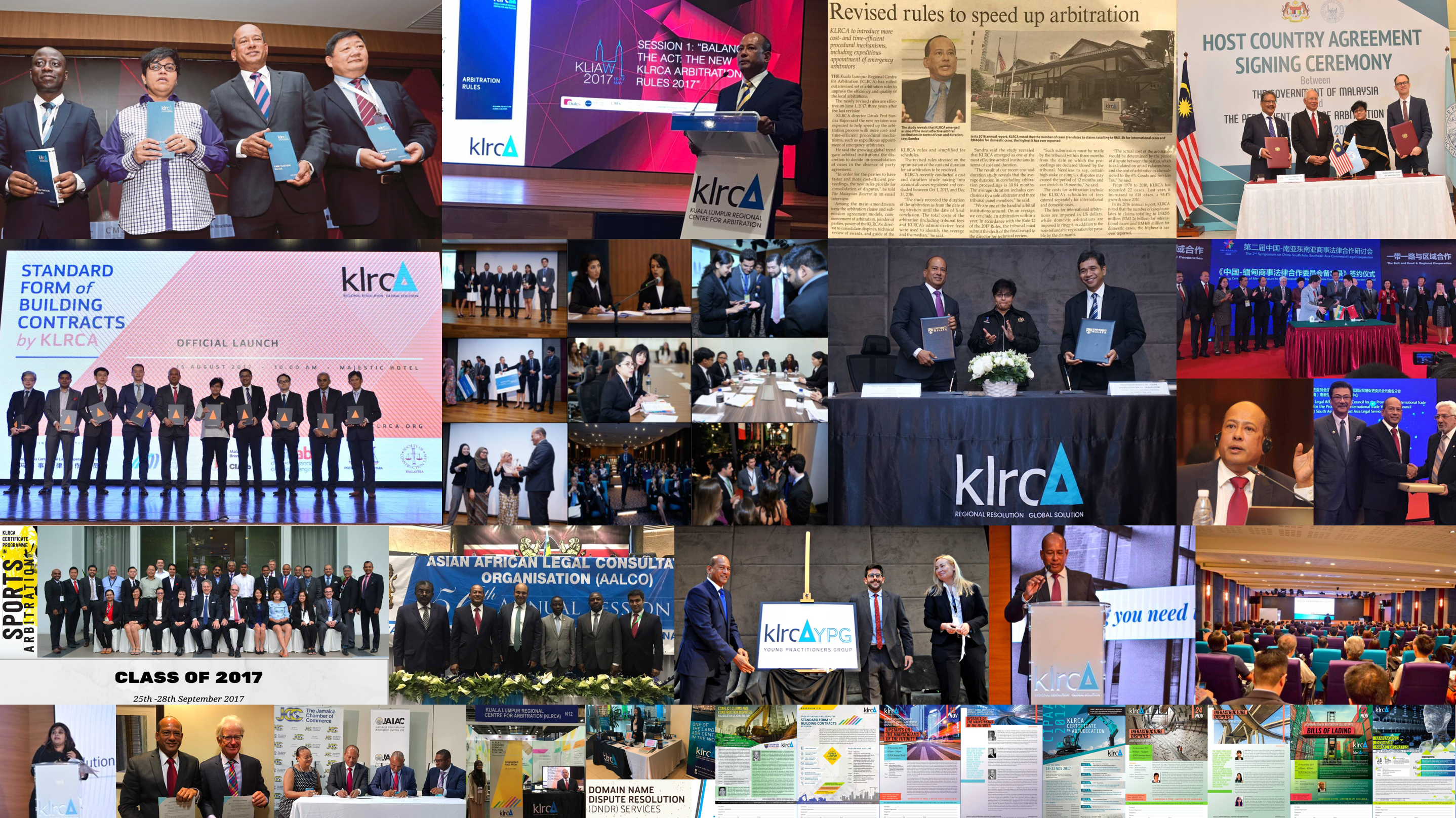 Greetings from KLRCA! As 2018 approaches, we would like to take this opportunity to thank everyone who has been a part of our journey this year.

KLRCA witnessed a number of monumental milestones in 2017 such as the launch of KLRCA’s Arbitration Rules 2017 which provided for enhanced provisions such as joinder of additional parties, consolidation of proceedings and technical review of awards to name a few, at the Kuala Lumpur International ADR Week 2017. KLIAW 2017 was KLRCA’s showcase event of the year with 65 distinguished speakers and more than 200 delegates from around the globe participating in discussions covering current issues and challenges facing the international ADR landscape.

In March, KLRCA together with the International Chamber of Commerce (ICC) held our first Pre-Moot for the Willem C. Vis International Commercial Arbitration Moot. The successful inaugural edition saw a total of 36 participating teams with over 160 participants from 15 countries, and more than 110 arbitrators across the globe. In 2018, KLRCA will be expanding the competition to host up to 70 teams.

In August, KLRCA launched its own building contracts – the “Standard Form of Building Contracts”, creating history in the process by becoming the first arbitral institution in the world to do so. The launch was followed by roadshows in Johor, Penang, Sabah and Sarawak, and in total, hosted over 2,200 participants. A comprehensive website portal was introduced where users can customise and download their contract forms for free. The vision for year 2018, is to work on additional contracts and enhance user experience on the website portal.

KLRCA also has signed a number of important MoUs in 2017 with esteemed institutions such as the International Court of Arbitration of the ICC in Paris, Beijing Arbitration Commission (BAC) and the Cairo Regional Center for International Commercial Arbitration (CRCICA), contributing to a total of 48 signed MoUs as of 2017.

Following the success of 2017 and in line with our continuous efforts in shaping KLRCA as an international ADR hub, KLRCA will be rebranding as Asian International Arbitration Centre (AIAC). The new identity will spearhead an era of development and expansion, both for the Centre and the global ADR ecosystem.

In the coming weeks and months, KLRCA’s new identity, the Asian International Arbitration Centre (AIAC) will be unveiled through our official website, events, and communication channels. We look forward to sharing this next phase of our journey while continuing to spur the global ADR industry.

On that note, we would like to take this opportunity to wish all of you a happy and successful New Year!